The 17 claims extend for approximately 10km NE of the Kid Creek and E Kid Creek junction.

The DD-Panda, Moby Dick and NZOU properties are located on the western limb of the Purcell Anticlinorium and are underlain by the Lower and Middle Aldridge members of the Aldridge Formation (Figures 2 & 3). Several gabbroic Moyie sills also intrude into Middle Aldridge stratigraphy throughout the property area. Middle Aldridge comprises the bulk of the property area and are typified by wackes, quartzitic wackes and interbedded wackes. The Lower Aldridge member is bound to the southeast by the Moyie fault. To the southeast of the Moyie fault is the younger Creston and Kitchener Formation rock units of the Middle Purcell. Within the Panda claims, bedding is shallowly dipping and exposes several Moyie sills. Outcrop in the area is relatively sparse.

Since the early 1980’s to the present, various exploration programs including mapping soil sampling, UTEM geophysical surveys and drilling has been conducted on the claims by major companies such as Cominco, Kennecott and Teck with junior explorers such as Sedex and Klondike Gold being active in the 2000’s. Teck in 2017-2018, after doing a review of the historic information over the area, completed 3 Titan 24 Magnetotelluric lines on the DD-Panda claims and completed a 1425m drill hole – PAN18-01. PAN18-01 was drilled to test for Sullivan-type Zn-Pb-Ag mineralization but failed to intersect the Sullivan horizon as it was stopped short in a gabbro sill. The main impetus for the work on these claims has been lead-zinc mineralization and Sullivan Indicators found in the Middle division of the Aldridge Formation. Sullivan Indicators located on this estimated 10 kilometre-long belt include fragmental rocks, tourmalinites, forms of alteration recognized at Sullivan, and galena, sphalerite and pyrrrhotite mineralization. The Teck hole PAN18-01, Irish05-01 and IR07-01 Holes encountered encouraging alteration and weak mineralization characteristic of the fringes to a Sullivan type system (Figures 3 and 4).

In July 2020, DLP Resources re-entered the PAN-18-01 hole of Teck. Drilling commenced at a depth of 1425.00m in a gabbro sill above the base of the Middle Aldridge Formation and ended at 1711.00m in the Lower Aldridge Formation. The Sullivan Horizon was intersected at the base of a faulted contact with the gabbro sill at 1529.00m and consisted of moderately to intensely altered siltstone/argillite. The alteration consisted of sericite, garnets, silicification, chlorite and minor albite to a depth of 1655.20m. Trace sphalerite was noted in a 24.80m interval from 1562.40m to 1589.42m (Figure 5).

Encouraging drill results from the PAN-18-01-Ex led DLP to do a Titan 24 MT geophysical survey by Quantec of 33 line kilometres on the properties in September 2020 (Figure 4). A significant NE-SW trend of high conductivity (low resistivity) anomalies was delineated over an area of 5km x 0.5 km (Figures 4 and 6). These geophysical anomalies coupled with drilling of PAN18-01-EX and relogging of historic holes Irish 05-01 and IR 07-01 strongly supports the idea that the main conductive body of possible Sullivan-type Zn-Pb-Ag mineralization is between Pan 18-01-Ex, IR 07-01 and the Irish05-01 drill holes (Figures 4 and 6). Geological sections across this area further support the fact that the MT anomalies are associated with the interpreted downdip extension or position at depth of the Upper to Lower Middle Aldridge Formation and proposed Sullivan Horizon (Figures 7, 8, 9 and 10). Drilling of an additional 10,000 to 12,000m is currently planned to test these targets in 2021. 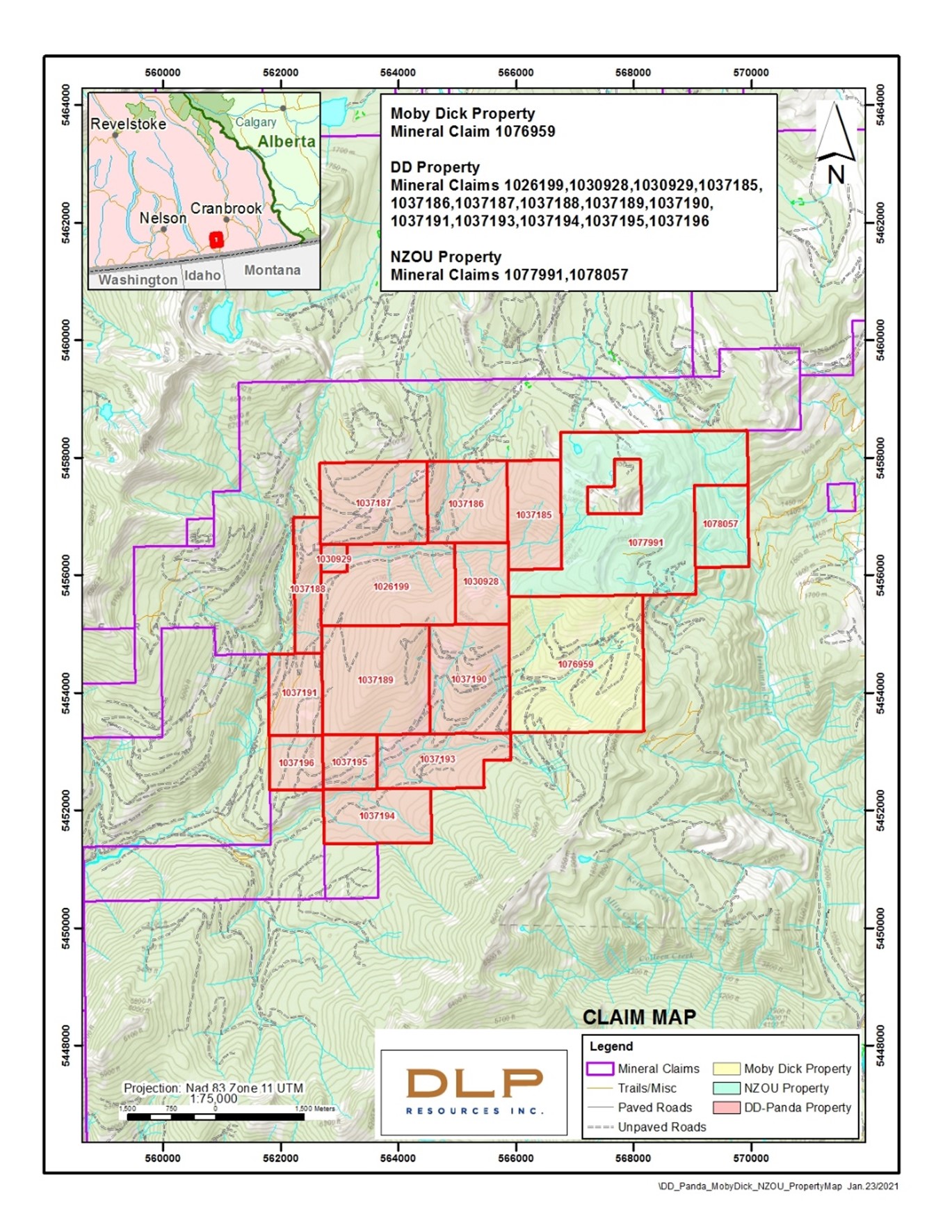 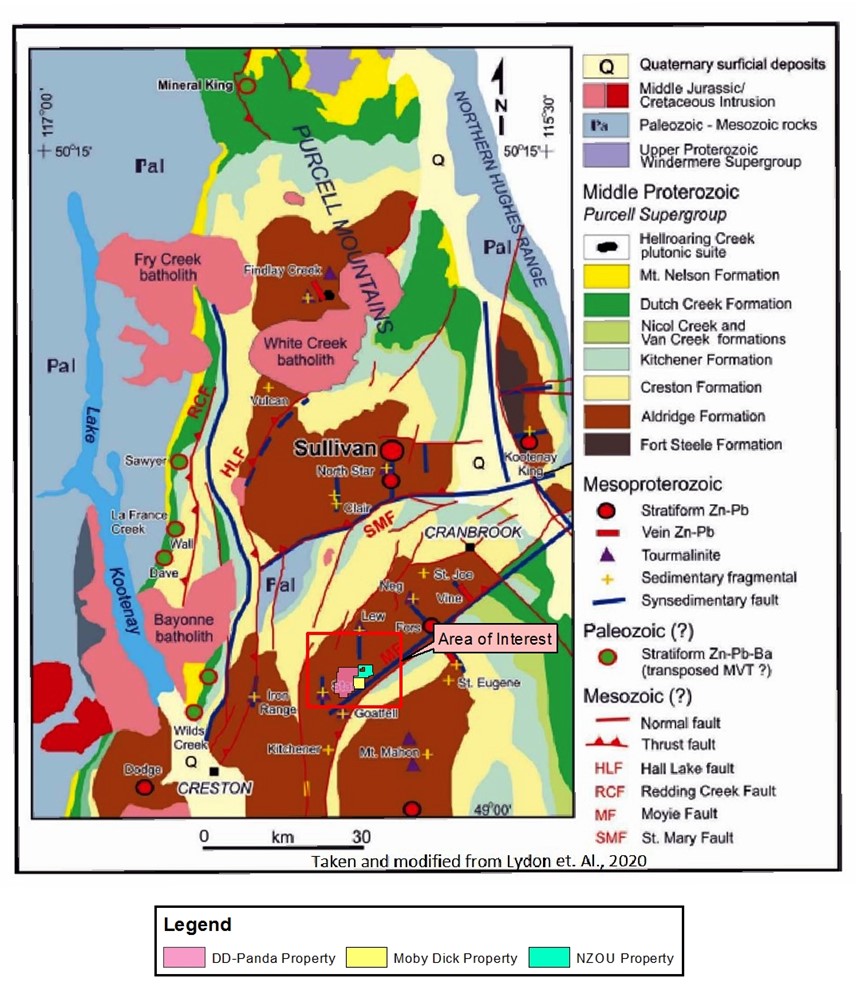 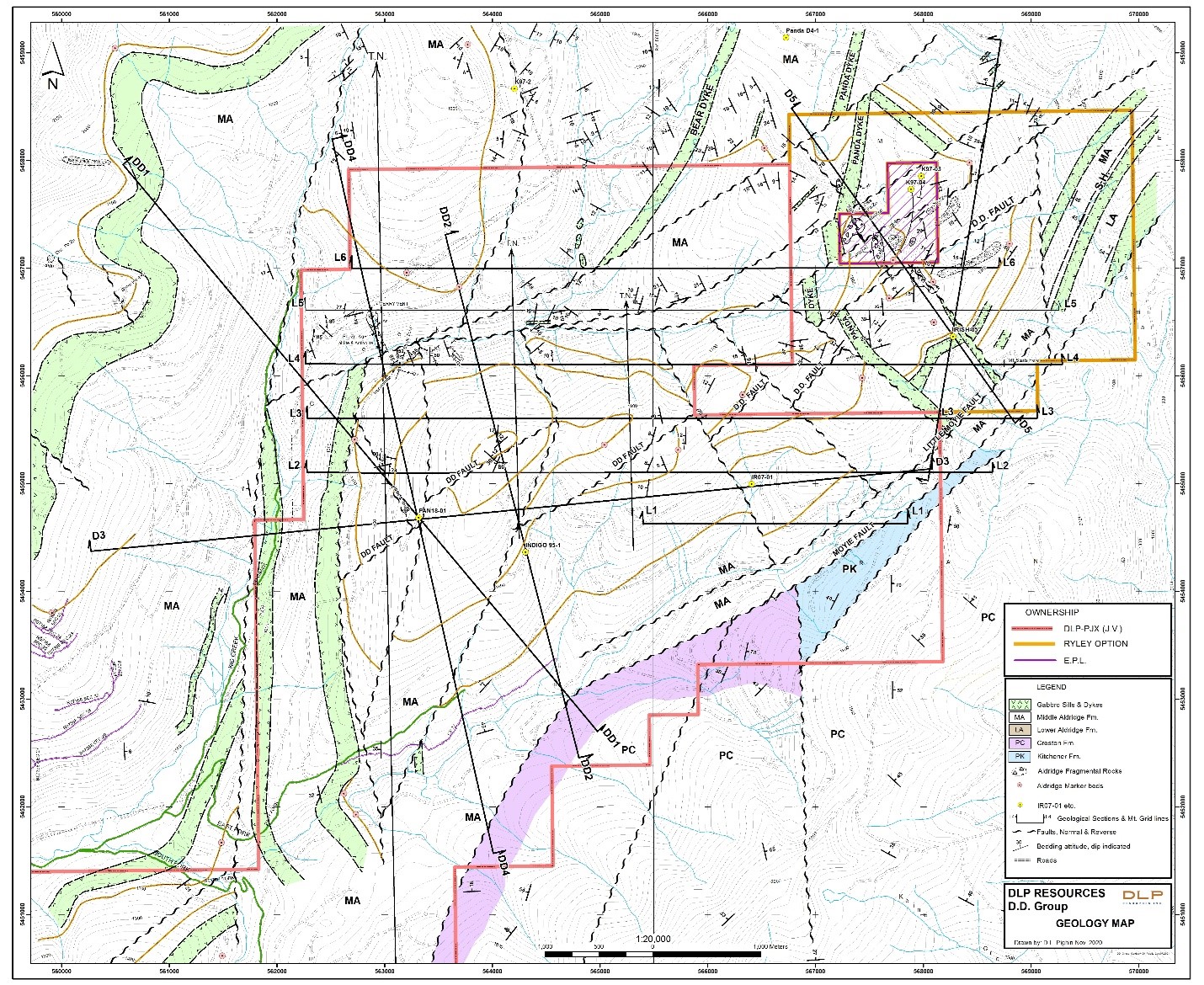 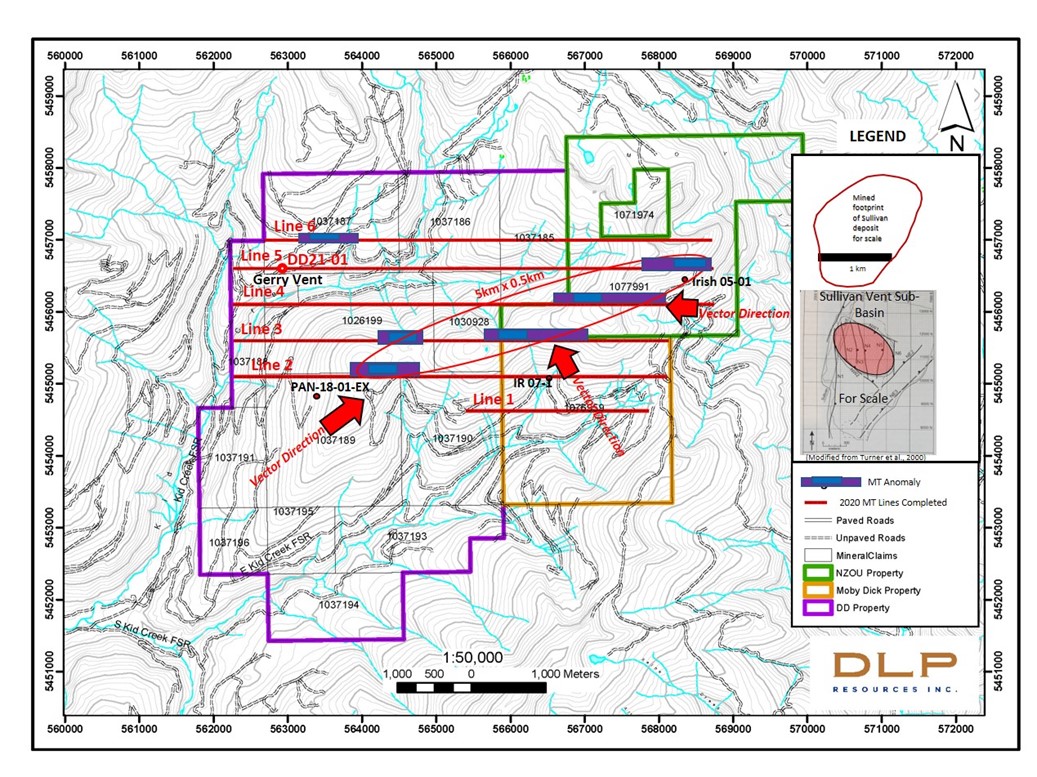 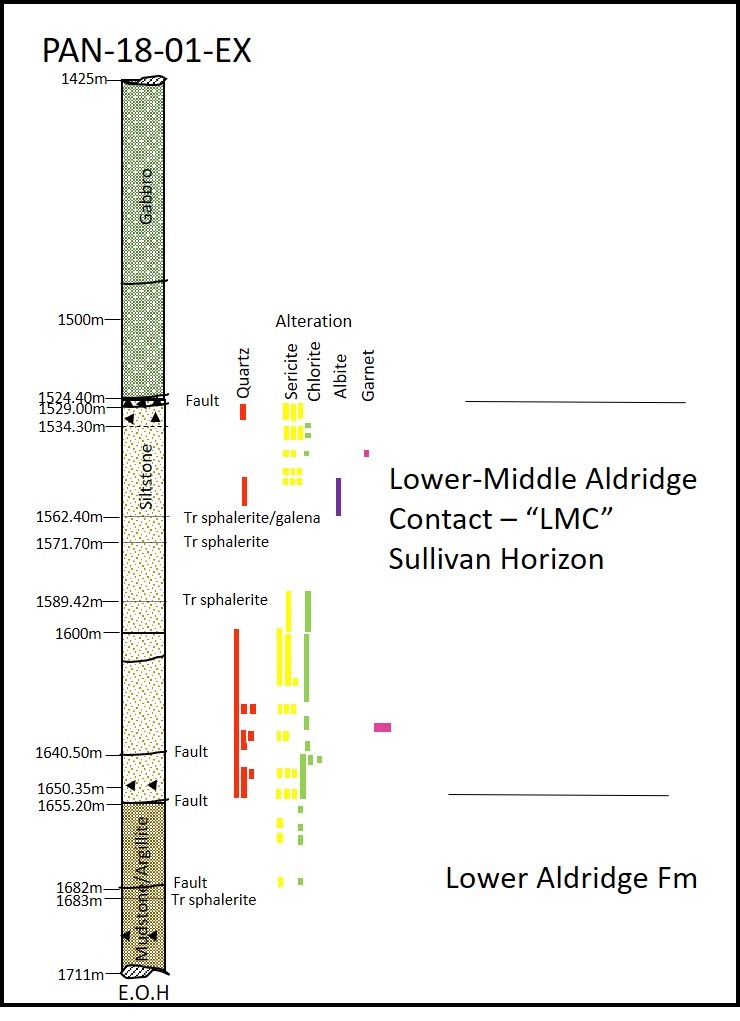 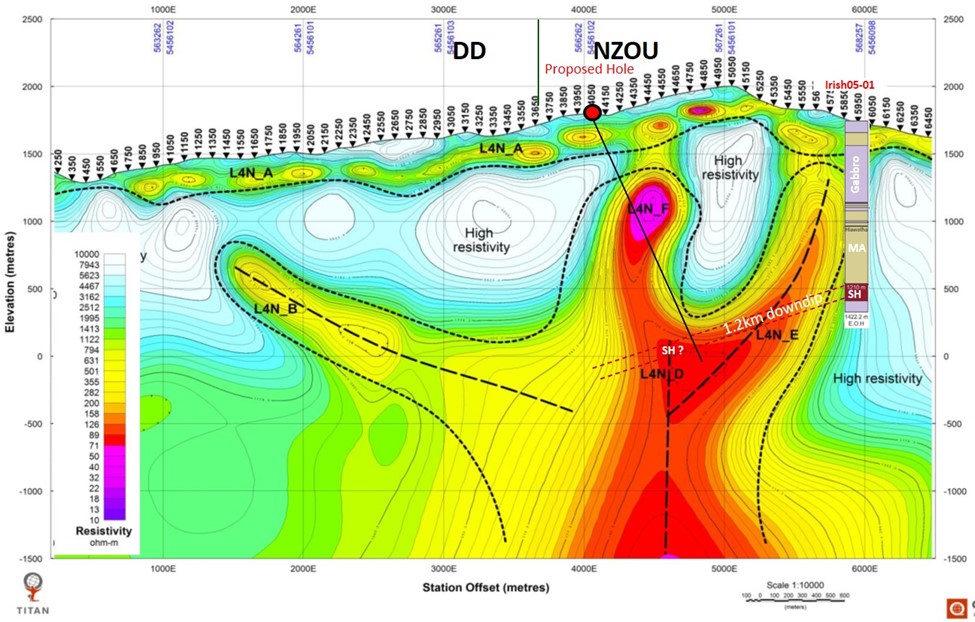 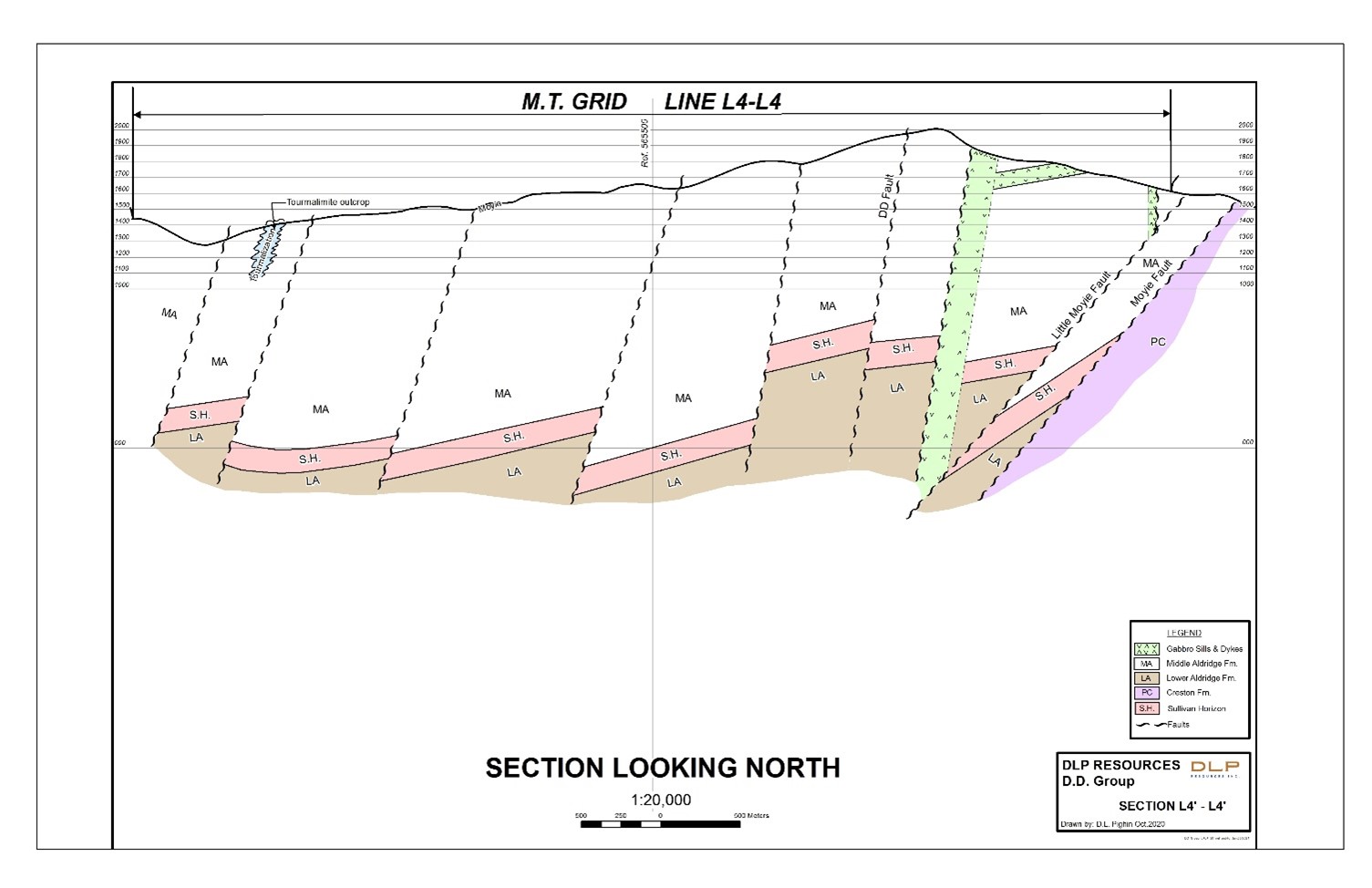 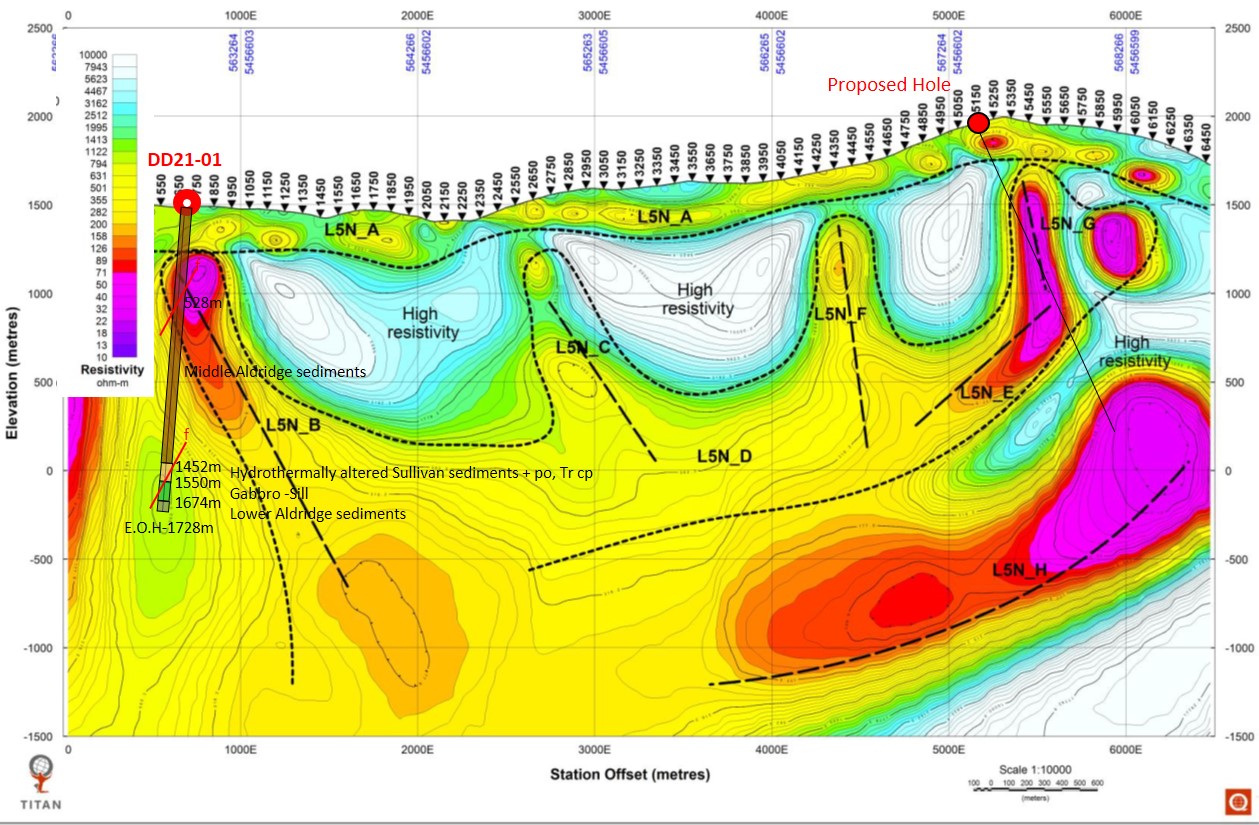